Rashtriya Swayamsevak Sangh, abbreviated as RSS (IAST: Rāṣṭrīya Svayamsevaka Saṅgha, IPA: [rɑːʂˈʈriːj(ə) swəjəmˈseːvək ˈsəŋɡʱ], lit.“National Volunteer Organisation”[14] or “National Patriotic Organisation”[15]), is an Indian right-wing, Hindu nationalist, paramilitary volunteer organisation that is widely regarded as the parent organisation of the ruling party of India, the Bharatiya Janata Party.[5][2][6][16] The RSS is the progenitor and leader of a large body of organisations called the Sangh Parivar (the “family of the RSS”), which have presence in all facets of the Indian society. Founded on 27 September 1925, the RSS is the world’s largest voluntary organisation.[17] It is the largest NGO in the world,[18] while the BJP is the largest political party in the world.[19]

The initial impetus was to provide character training through Hindu discipline and to unite the Hindu community to form a Hindu Rashtra(Hindu nation).[20][21] The organisation promotes the ideals of upholding Indian culture and the values of a civil society and spreads the ideology of Hindutva, to “strengthen” the Hindu community.[22][9] It drew initial inspiration from European right-wing groups during World War II.[21] Gradually, RSS grew into a prominent Hindu nationalist umbrella organisation, spawning several affiliated organisations that established numerous schools, charities, and clubs to spread its ideological beliefs.[21]

The RSS was banned once during British rule,[21] and then thrice by the post-independence Indian government, first in year 1948 when a former RSS member[23]assassinated Mahatma Gandhi;[21][24][25] then during the emergency (1975–77); and for a third time after the demolition of Babri Masjidin year 1992. 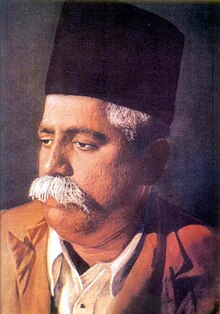 RSS was founded in 1925 by Keshav Baliram Hedgewar, a doctor in the city of Nagpur, British India.[3]

Hedgewar was a political protege of B. S. Moonje, a Tilakite Congressman, Hindu Mahasabha politician and social activist from Nagpur. Moonje had sent Hedgewar to Calcutta to pursue his medical studies and to learn combat techniques from the revolutionary secret societies of the Bengalis. Hedgewar became a member of the Anushilan Samiti, an anti-British revolutionary group, getting into its inner circle. The secretive methods of these societies were eventually used by him in organising the RSS.[26][27][28]

After returning to Nagpur, Hedgewar organised anti-British activities through the Kranti Dal (Party of Revolution) and participated in independence activist Tilak‘s Home Rule campaign in 1918. According to the official RSS history,[29] he came to realise that revolutionary activities alone were not enough to overthrow the British. After reading V. D. Savarkar‘s Hindutva, published in Nagpur in 1923, and meeting Savarkar in the Ratnagiriprison in 1925, Hedgewar was extremely influenced by him, and he founded the RSS with the objective of strengthening the Hindu society.[26][27][28][30] 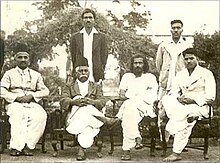 Hedgewar believed that a handful of British were able to rule over the vast country of India because Hindus were disunited, lacked valour (pararkram) and lacked a civic character. He recruited energetic Hindu youth with revolutionary fervour, gave them a uniform of a black forage cap, khaki shirt (later white shirt) and khaki shorts—emulating the British police—and taught them paramilitary techniques with lathi (bamboo staff), sword, javelin, and dagger. Hindu ceremonies and rituals played a large role in the organisation, not so much for religious observance, but to provide awareness of India’s glorious past and to bind the members in a religious communion. Hedgewar also held weekly sessions of what he called baudhik(ideological education), consisting of simple questions to the novices concerning the Hindu nation and its history and heroes, especially warrior king Shivaji. The saffron flag of Shivaji, the Bhagwa Dhwaj, was used as the emblem for the new organisation. Its public tasks involved protecting Hindu pilgrims at festivals and confronting Muslim resistance against Hindu processions near mosques.[26][27][28]

Two years into the life of the organisation, in 1927, Hedgewar organised an “Officers’ Training Camp” with the objective of forming a corps of key workers, whom he called pracharaks. He asked the volunteers to become sadhus first, renouncing professional and family lives and dedicating themselves to the cause of the RSS. According to scholar Christophe Jaffrelot, Hedgewar embraced this doctrine after it had been reinterpreted by nationalists such as Aurobindo. The tradition of renunciation gave the RSS the character of a ‘Hindu sect’.[32] Development of the shakhanetwork of the RSS was the main preoccupation for Hedgewar throughout his career as the RSS chief. The first pracharakswere responsible for establishing as many shakhas as possible, first in Nagpur, then across Maharashtra and eventually in the rest of India. P. B. Dani was sent to establish a shakha at the Benaras Hindu University and other Universities were similarly targeted to recruit new followers among the student population. Three pracharaks went to Punjab: Appaji Joshi to Sialkot, Moreshwar Munje to the DAV College in Rawalpindi and Raja Bhau Paturkar to the DAV College in Lahore. In 1940, Madhavrao Muley was appointed as the prant pracharak (regional missionary) in Lahore.[33]

Scholars differ on Hedgewar’s motivations for forming the RSS, especially because he never involved the RSS in fighting the British rule. Jaffrelot says that the RSS was intended to propagate the ideology of Hindutva and to provide “new physical strength” to the majority community.[9] An alternative interpretation is that he formed it to fight the Indian Muslims.[34]

After Tilak’s demise in 1920, like other followers of Tilak in Nagpur, Hedgewar was opposed to some of the programmes adopted by Gandhi. Gandhi’s stance on the Indian Muslim Khilafat issue was a cause for concern to Hedgewar, and so was the fact that the ‘cow protection’ was not on the Congress agenda. This led Hedgewar, along with other Tilakities, to part ways with Gandhi. In 1921, Hedgewar delivered a series of lectures in Maharashtra with slogans such as “Freedom within a year” and “boycott”. He deliberately broke the law, for which he was imprisoned for a year. After being released in 1922, Hedgewar was distressed at the lack of organisation among the Congress volunteers for the independence struggle. Without proper mobilisation and organisation, he felt that the patriotic youth of India could never get independence for the country. Subsequently, he felt the need to create an independent organisation that was based on the country’s traditions and history.[35]

The decade of 1920s witnessed a significant deterioration in the relations between Hindus and Muslims. The Muslim masses were mobilised by the Khilafat movement, demanding the reinstatement of the Caliphate in Turkey, and Gandhi made an alliance with it for conducting his own Non-co-operation movement. Gandhi aimed to create Hindu-Muslim unity in forming the alliance. However, the alliance saw a “common enemy”, not a “common enmity” When Gandhi called off the Non-co-operation movement due to outbreaks of violence, Muslims disagreed with his strategy. Once the movements failed, the mobilised Muslims turned their anger towards Hindus. The first major incident of religious violence was the in August 1921, which ended in large-scale violence against Hindus and their displacement in A cycle of inter-communal violence throughout India followed for several years. In 1923, there were riots in Nagpur, called “Muslim riots” by Hedgewar, where Hindus were felt to be “totally disorganized and panicky.” These incidents made a major impression on Hedgewar and convinced him of the need to organise the Hindu society.

After acquiring about 100 swayamsevaks(volunteers) to the RSS in 1927, Hedgewar took the issue to the Muslim domain. He led the Hindu religious procession for Ganesha, beating the drums in defiance of the usual practice not to pass in front of a mosque with music. On the day of Lakshmi Puja on 4 September, Muslims are said to have retaliated. When the Hindu procession reached a mosque in the Mahal area of Nagpur, Muslims blocked it. Later in the afternoon, they attacked the Hindu residences in the Mahal area. It is said that the RSS cadres were prepared for the attack and beat the Muslim rioters back. continued for 3 days and the army had to be called in to quell the violence. RSS organised the Hindu resistance and protected the Hindu households while the Muslim households had to leave Nagpur en masse for safety. Tapan Basu et al. note the accounts of “Muslim aggressiveness” and the “Hindu self-defence” in the RSS descriptions of the incident. The above incident vastly enhanced the prestige of the RSS and enabled its subsequent expansion.

Christophe Jaffrelot points out the theme of “stigmatisation and emulation” in the ideology of the RSS along with other Hindu nationalist movements such as the Arya Samaj and the Hindu Mahasabha. Muslims, Christians and the British were thought of as “foreign bodies” implanted in the Hindu nation, who were able to exploit the disunity and absence of valour among the Hindus in order to subdue them. The solution lay in emulating the characteristics of these “Threatening Others” that were perceived to give them strength, such as paramilitary organisation, emphasis on unity and nationalism. The Hindu nationalists combined these emulatory aspects with a selective borrowing of traditions from the Hindu past to achieve a synthesis that was uniquely Indian and Hindu.

The Hindu Mahasabha, which was initially a special interest group within the Indian National Congress and later an independent party, was an important influence on the RSS, even though it is rarely acknowledged. In 1923, prominent Hindu leaders like Madan Mohan Malaviya met together on this platform and voiced their concerns on the ‘division in the Hindu community’. In his presidential speech to Mahasabha, Malaviya stated: “Friendship could exist between equals. If the Hindus made themselves strong and the rowdy section among the Mahomedans were convinced they could not safely rob and dishonour Hindus, unity would be established on a stable basis.” He wanted the activists ‘to educate all boys and girls, establish akharas (gymnasiums), establish a volunteer corps to persuade people to comply with decisions of the Hindu Mahasabha, to accept untouchables as Hindus and grant them the right to use wells, enter temples, get an education.’ Later, Hindu Mahasabha leader V. D. Savarkar’s ‘Hindutva’ ideology also had a profound impact on Hedgewar’s thinking about the ‘Hindu nation

The initial meeting for the formation of the Sangh on the Vijaya Dashami day of 1925 was held between Hedgewar and four Hindu Mahasabha leaders: B. S. Moonje, Ganesh Savarkar, L. V. Paranjpe and B. B. Tholkar. RSS took part as a volunteer force in organising the Hindu Mahasabha annual meeting in Akola in 1931. Moonje remained a patron of the RSS throughout his life. Both he and Ganesh Savarkar worked to spread the RSS shakhas in Maharashtra, Panjab, Delhi, and the princely states by initiating contacts with local leaders. Savarkar merged his own youth organisation Tarun Hindu Sabha with the RSS and helped its expansion. V. D. Savarkar, after his release in 1937, joined them in spreading the RSS and giving speeches in its support. Officials in the Home Department called the RSS the “volunteer organisation of the Hindu Mahasabha.”